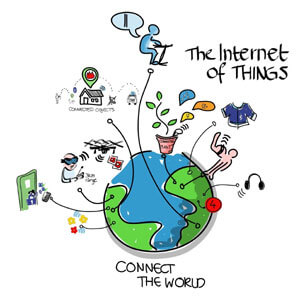 The idea that smart technology is with us almost constantly is now an ordinary concept, and a convenience most of us take for granted. Wherever the internet can be accessed, so too can our banks, supermarkets, news providers and social media – to name only a few things. To go against the lamentations of the poet William Wordsworth, the world isn’t too much with us. It’s friendly, accessible and open all hours, and with the advent of wearable tech the remaining obstacles to convenience and portability will soon come crashing down and true mobility, personalisation and location-based information will become second nature.

The next wave of personalised, ubiquitous technology

While Apple is emphasising luxury and expense in its Apple Watch ads, wearable tech won’t long be something only the wealthy enjoy. After all, there have always been eye-wateringly expensive watches but most people now own a car, television and microwave. Technology has become a part of everyday life and the Internet of Things will be instrumental in linking them all together. Similarly, wearable tech will bridge the gap between stationary devices and personal computing – the internet, remote sensors, input/output interfaces and mobile protocols will allow this to happen seamlessly. Some experts think that wearables will become widespread in the next 12 months. So how do we get there?

Last year Deloitte predicted that sales of smart glasses, smart watches and fitness bands would reach about £2 billion. Confident that their appeal would grow with better design, the company also surmised that 4 million goods from ‘new categories’ would fly off the shelves. Canalys likewise projected sales of 23 million smart bands by 2015, and more than 45 million by 2017. As the medical industry begins to incorporate the technology (such as smart device-compatible hearing aids) wearable device use has been increasing.[Tweet “Sales of #smartglasses, #smartwatches and #fitnessbands is predicted to reach about £2 Billion.”]

Ubiquitous computing – the technology inside wearables – is designed to appear anywhere and everywhere. But, as Paul Krugman noted in The New York Times Blog recently, whereas smart devices allow you to keep track of things, wearables generally allow things to keep track of you, or in business terms, allow for performance-based assessment and data collection to go wherever you do. If this seems a bit cynical, let’s look at how wearables will benefit businesses, with marketing in particular.

Ski goggles that incorporate wearable tech can show speed, altitude and descent within the user’s field of vision. The next step would be to create something similar (a Google Glass function perhaps?) that could analyse factory robot performance and see directly into functionality problems as they occur. We can expect collaboration between tech giants such as Google, Apple and Samsung and sports manufacturers Adidas and Nike for a start to build on these concepts for personal use, but professional models won’t be long behind them.

Augmented (AR) and virtual reality (VR) devices like the Oculus Rift can do their part to help businesses with:

An estate agent might show people round an empty house while a headset projects their belongings into the rooms. We’ll soon be spoiled for choice in this area, with the devices all eager to make themselves useful and ubiquitous during our working hours:

2. Up-to-the-minute marketing as an integrated experience

There’s little doubt that Google has hugely benefitted from advertising, and wearable tech will be able to take that even further through the Internet of Things. Based on a number of signals and events from your smart devices, wearable tech can provide services right when they are needed.

For example, you’re running late to pick up your child from a school trip. Based on your smart device’s calendar (which shows the date and time of the event’s finish), an alert from your car’s engine when it stalled and died, and live-stream traffic monitoring on the route to school, wearable tech will offer to book a cab from Uber, contact a recovery mechanic and suggest a café you might like to go to with your child in order to catch your breath and ring the insurance company. Marketing can now be an integrated experience, and companies will better be able to show how they can fit into our lives as we’re living them.[Tweet “#Marketing can now be an integrated experience, to benefit #business.”]

Moving on from door passes and electronic ID cards, smart devices such as the NFC Ring can unlock doors and mobile devices. Further capabilities such as data storage and transfer, opening apps with custom settings and the ability to turn Wi-Fi and Bluetooth on and off all add to the usefulness of such small but essential devices. While this won’t immediately appeal to marketers, chances are they’ll all be using them, and most importantly, these are the tools which are most likely to get us into wearable tech in the office. As forerunners, they will usher in more and more wearable advancements.

4. Discovering what the customer really thinks

Forget sound and vision, it’s now about emotion and location. Although a more distant possibility than some of the more immediate options of wearable tech, the provision of feedback based on a consumer’s whereabouts and mood does present interesting opportunities. In theory, smart devices such as clothing and jewellery could contain sensors that record their biological reactions to products as well as a report when they purchase (or don’t) particular items and services. It’s certainly a leap, but the amount that could be learned from customer perspectives would be invaluable. Just think about walking into an Apple store or any other shop for that matter and receiving product info, coupons and customer reviews coming at you.

5. Personal, digital feedback will unlock the minds of customers

Get in touch with our experts today

7 great mobile apps for in and out of the office

Although more and more companies are rushing to produce the next world-conquering app that will win those proverbial hearts and...

Tech 101: What is Bespoke Software?

Bespoke software is specially developed to the requirements of a user or organisation, which differs from off-the-shelf software that is...

It was Socrates (allegedly) who coined the aphorism "Know Thyself" and the principle still stands for businesses today. Customer relationship management...

People who work with ground-breaking technology are used to discussing, testing and showing off the latest innovations. But isn’t wearing...

Want to stay up-to-date with the latest from DCSL GuideSmiths? Sign up for our newsletter to receive blog updates straight to your inbox.

We use cookies on our website to give you the most relevant experience by remembering your preferences and repeat visits. By clicking “Accept All”, you consent to the use of ALL the cookies. However, you may visit "Cookie Settings" to provide a controlled consent.
Cookie SettingsAccept All
Manage consent