The late, the bad and the imaginary: 7 epic software failures 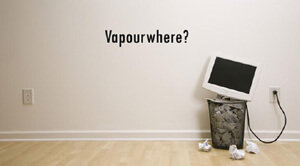 In the cult classic film Office Space, a group of disgruntled office employees dream about transforming their lives but lack the courage to put their plans into action. One character believes the world is holding its breath for his greatest invention: a Jump to Conclusions Mat (see what he did there?). Although no one is convinced that jumping onto squares labelled ‘Think Again’, ‘Go Wild’ and ‘Accept It’ will aid their decision-making skills, Tom continues to fantasise about his future success.

It seems a lot of people are confident their idea will be the next big thing. The results can be wonderfully irrelevant. Some aim to replace simple, common products (a table knife) that need no improvement (a banana slicer), while others are needlessly complicated or possibly injurious (a 10kg dumbbell alarm clock that requires 30 reps to switch off). It’s no surprise that in the fast-paced world of technology, many software ideas never get off the ground or become obsolete even before they get shipped or fail soon afterwards.

[Tweet “In the fast-paced world of #technology, many #software #ideas never get off the ground.”]

Here are 7 to get you thinking:

Although Vapourware is announced to the public, this software and hardware is neither manufactured nor formally cancelled. It’s publicised in the hopes of retaining customers tempted to switch to a competitor, but it is literally a developer’s dream … and a marketers nightmare. Notorious examples include:

This holding pen is more like limbo, where concepts, software and other half-formed projects linger without getting to production stage. They are never officially cancelled but development and refinement slows or stops. When long-term software development enters development hell it is considered vapourware (see above).

When is something so late to get shipped that it can hardly be considered the originally advertised product? As long as 10 years? What about 50 years? How can an exciting launch become old news before it even happens?

The idea that smart technology is with us almost constantly is now an ordinary concept, and a convenience most of...

People who work with ground-breaking technology are used to discussing, testing and showing off the latest innovations. But isn’t wearing...

Apple Pay: The future of contactless payment and banking?

We’ve heard rumours of it coming – now Apple Pay is here.  Making strides into the fast-developing world of mobile,...

There are many ways that businesses can use technology to help them improve efficiency, effectiveness, innovation and much more. But...