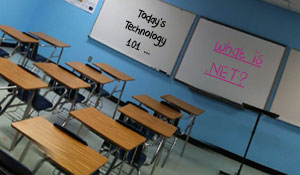 .NET is a software framework developed by Microsoft that runs on multiple platforms and allows developers to create apps more easily and efficiently. .NET handles systems memory management, dealing with exception handling when anomalous conditions arise, and security matters. It also clears up all the ‘garbage’ accumulated by running apps and frees memory by removing unusable objects behind the scenes without the user lifting a finger, or indeed even realizing such automatic memory management is being done.

How does .NET work?

Simply speaking, developers can use a number of programming languages to write a .NET application, which the framework  then converts into computer instructions run by the Common Language Runtime (CLR). The Framework Class Library (FCL) provides developers with all the tools to create their apps. Still with me? Then let’s get into the fun stuff…

The Framework’s design also allows for installation of new software without conflict to existing programs or security measures. The .NET Framework is compatible across all devices and form factors and new Windows apps use .NET to run properly, making it a rather important tool for continuing a business’s IT development.

Adaptability is key here. Because .NET is language-neutral and platform-agnostic – terms that means it can work with a variety of coding languages on different platforms – a number of other operating systems can use it and it can run both older and newer software. Companies such as CoreLabs have been able to switch from Java to .NET in order to develop security research projects and create apps more quickly, while the US insurance company Geico used the framework to develop GloveBox, an Android app that lets customers get quotes, pay their bill and view insurance cards.[Tweet “#Geico used the #.NET Framework to develop #GloveBox, an #Android app”]

Given the widespread use of Windows OS by businesses, software developers are generally very familiar with C#, the programming language of .NET and Windows OS XP and later versions. When it comes to adaptation, development and problem-solving, .NET facilitates faster upgrades and Agile releases, and it can be supported both by Microsoft and software developers alike. There are no niche languages to be grappled with here; everything is designed to be compatible and optimised for open source development. For this reason many businesses are choosing to migrate from old business solutions such as Drupal and WordPress to .NET.[Tweet “#.NET facilitates faster upgrades and #Agile releases.”]

.NET now versus 10 years ago

Released a little more than a decade ago, .NET entered the world as a single framework. It went on to have an additional release as .NET Compact Framework, a subset that worked with Windows Mobile, Silverlight, Windows Phone and Windows Store and had a number of platforms run by different teams and specialising in diverse features. Back then it was much less common to have apps spanning different devices.

What’s in store for the future?

Apps aren’t going anywhere; in fact, businesses are creating them every day in order to maximise efficiency and make connections with customers. It’s only natural to want the creation process to be as smooth and fast as possible and .NET can be a key component. For all the businesses using Windows OS, .NET will aid the installation of new Windows apps, and help run distributed web services too, saving quite a bit of time and grief in the process. You don’t have to create apps to find .NET useful, just use them – something we’ll find difficult to avoid in the next few years.

DCSL’s Microsoft approved software developers use the Microsoft .NET Framework and can build a business app for you that will add value to your business.

Get A Quote for a Business App

How to market your new (mobile or web) app

It’s official: smartphones are more popular when it comes to accessing the internet in the UK, and mobile app downloads...

We often have misconceptions about things we may not truly understand. It’s really not such a long time since the...

Software bugs are inevitable in any custom software development project, and a serious development team will carry out extensive testing...

For a business that wants to see quick return on investment, white label software is often a great option. But...

Want to stay up-to-date with the latest from DCSL GuideSmiths? Sign up for our newsletter to receive blog updates straight to your inbox.

We use cookies on our website to give you the most relevant experience by remembering your preferences and repeat visits. By clicking “Accept All”, you consent to the use of ALL the cookies. However, you may visit "Cookie Settings" to provide a controlled consent.
Cookie SettingsAccept All
Manage consent