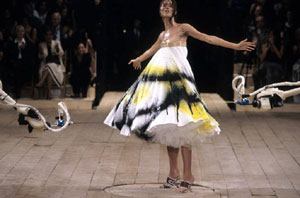 People who work with ground-breaking technology are used to discussing, testing and showing off the latest innovations. But isn’t wearing the latest trends something only supermodels, Shoreditch hipsters and fashion-savvy teenagers do? Not for long. Wearable tech is moving off the pattern cutting table and into our daily lives. From the kitchen counter to the office desk to the gym locker room, we are discovering new ways to track the ways we interact with the world.

The shock of the old meets the new

Wearable technology isn’t new. While we narrowly avoided the asymmetrical dresses, Star Trek haircuts and other sartorial innovations suggested at the turn of the millennium (as well as the dire prophecies of the Y2K glitch), we’ve relentlessly pursued ways of integrating computing into more and more aspects of our everyday lives.

Design is one of the most difficult things to get right with wearable devices. In an attempt to popularise Google Glass, the tech giant enlisted the help of popular fashion designer Diane von Furstenberg. Google Glass by DVF may enable users to take videos, navigate Google maps and email Chanel whenever they feel a spending spree coming on, but the product has not yet been able to overcome its rather unattractive design. Sales figures reflect the general public’s unwillingness to spend large amounts on unappealing devices no matter how advanced the software is. And there’s no question that this hurdle must be overtaken on the street before it can make it into the workplace. We want the status symbol of a cutting-edge device without the hassle, and if a Pebble Steel smart watch can do this better than its peers there are a lot of people willing to hand over their bank details to get their hands on one.

Clever design can even smooth the way for popular acceptance of devices we don’t primarily need. A brilliant ad campaign that elevates concept and appearance to must-have status regardless of actual necessity will sell any number of products. Opening Ceremony has recently joined forces with Intel to create MICA (My Intelligent Communication Accessory) bangles. The bracelets sport pearls, semi-precious stones and snakeskin, and receive emails and texts on a 1.6-inch sapphire screen. Admittedly they are glorified (and simplified) smart phones but that hasn’t stopped fashionable women wanting to take one home.[Tweet “#Opening Ceremony recently joined forces with #Intel to create #MICA bangles.”]

From raincoats to Alexander McQueen

Happily, now is the perfect time to be looking at the marriage of IT and fashion, wearable tech and revolutionary design. The current V&A exhibition, Alexander McQueen: Savage Beauty, celebrates the rise of McQueen’s fashion house to a couture atelier, with a little help from the digital age. Plato’s Atlantis, the designer’s last collection before his death in 2010, featured digital prints and sci-fi fabrics such as rubberized cotton, stretch jersey, metallic scales. These enabled the designer to craft new shapes for the clothes and push the boundaries of what was considered wearable. Aquascutum, the celebrated British coat maker, was doing the same in 1853 when it invented the first truly waterproof cloth – and we’ve not looked back since. Google Glass is no different in its pursuit of the next advancement. It just takes longer to get the technology right and looking as good as that first storm-ready trench coat.[Tweet “It takes longer to get #technology looking as good as that first storm-ready trench coat.”]

The key to success is in the design

The most popular wearable tech of the moment is fitness tracking housed in a wristband. Nike+ FuelBand, Fitbit and Jawbone devices have taken the pedometer to the next level. Thanks to their motion sensors, you can be notified via smart phone how many steps, burned calories and minutes of sleep you clock up and associated apps suggest improvements for each area. Studies have shown that fitness trackers can actually promote activity (or shame the habitual coach potato into changing position), which is good news for joggers but even better, one hopes, for businesses. Where fitness bands can foster friendly competition between users, stream feedback and provide motivation, perhaps they can do something similar for employees.

Wearable tech in the work place needs to impress users with its ‘new’ solutions to such age-old problems as meeting performance goals, improving connectivity and so forth, but its popularity also depends on our human liking for simplicity. There is a great deal more potential than just tracking and monitoring employee engagement and productivity, and Disney and Hitachi are only the first of many companies to begin using wearable tech in this way. The devices that make our lives easier with minimal need for input are the things that will last, and linking them together seamlessly and attractively will give them popular appeal.[Tweet “The #future of #wearable tech becomes more real with each passing day.”]

At a basic level, companies such as leather goods manufacturer Asprey, which sells handbags with internal phone chargers, succeed in giving the public something digital, practical and stylish in one package. When it comes down to it, this is the very essence of being on-trend and a lasting success. The solution an in-bag charger provides is so obvious, so basic that it can only be a matter of time until we see them everywhere. The future of wearable tech becomes more real with each passing day, and we’re bound to keep up with it so long as it keeps up with all of our needs, stylistically and otherwise.[Tweet “Leather goods manufacturer #Asprey, sells #handbags with #internal phone chargers.”]

10 business apps that will help your business communicate better

Despite the popularity of smartphones and tablets, many business owners are unaware of just how greatly software apps can improve...

All businesses know that in order to succeed they need to have a clear profile of their customers and their...

Put simply, emerging technologies are innovations that have the potential to change the status quo. They are radically novel, fast-growing,...

Virtual or Augmented? How VR and AR shape business

The concept of 3D is nothing new. In art, theatre and cinema we have been exploring ways of creating an...